It’s always a pleasure for the Photomaker team when they form part of a themed event and we couldn’t have been happier to contribute towards a recent 50th birthday party which focused on our own favourite movie.

The planning for the event started well in advance.  David, the host, loves to throw a party and wanted to inject an element of mischief and fun into a somewhat sobering milestone.

The catering was entrusted into the able hands of Chef Stefan Hogan at Corinthia Palace Hotel, who was briefed on the chosen theme.  He created a menu which included Asian and Eastern European flavours which complemented the theme perfectly.

The invitations were inspired by Bond’s ‘Shaken not stirred’ martini penchant and played along the title of another Bond movie with the heading ‘For your eyes only’, with several references and phrases borrowed from other memorable Bond moments. 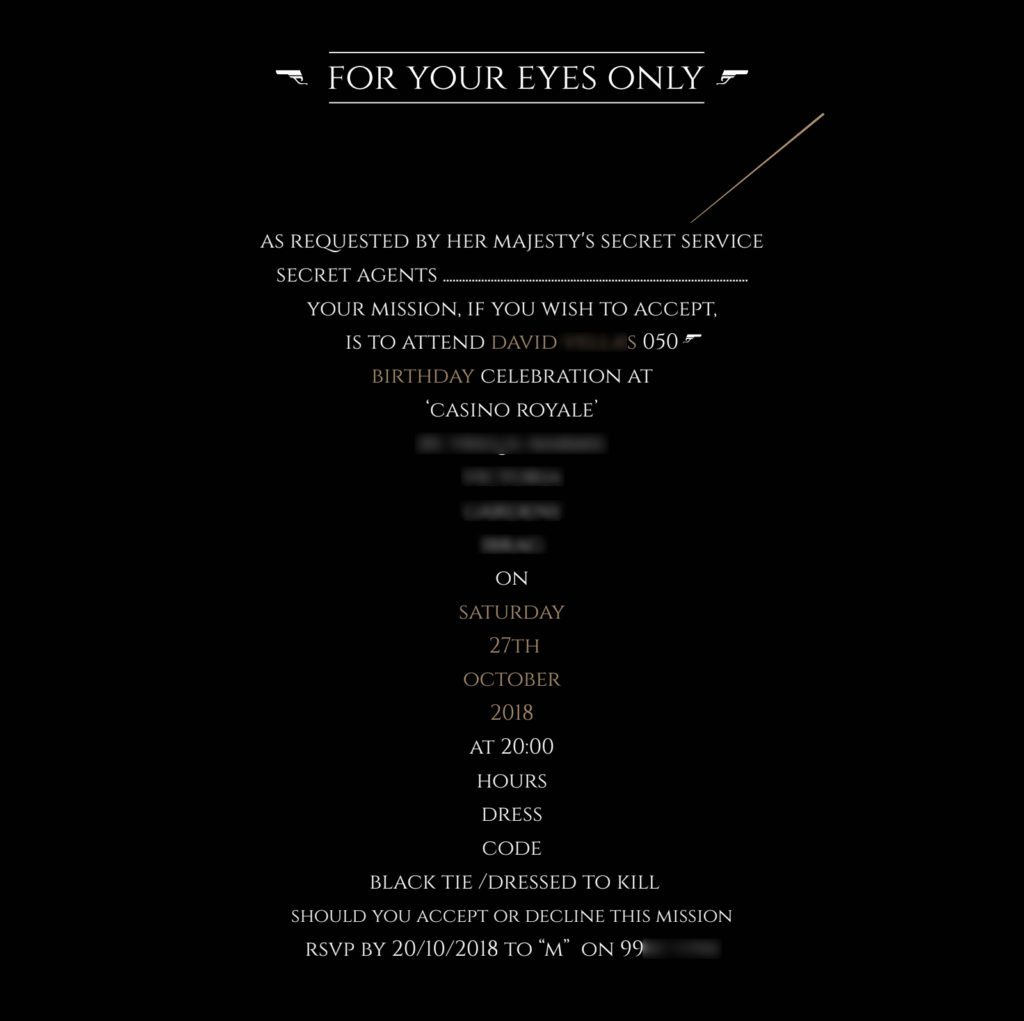 The text was laid out in the shape of a martini glass.

The dress code for the event was ‘Black Tie’, and very elegantly dressed guests turned up on the night dressed to the nines; the venue had been enhanced by the presence of an Aston Martin at the front door, brought in for the occasion, as well as a Casino Royale sign instead of the usual house name.  The theme was set for the night.

A beautiful ice sculpture, which doubled up as a gin bar, was commissioned from Ice Cool Exhibits and delivered a couple of hours before the event.  Paul Kind had been briefed on the theme, and the sculpture was a masterpiece, carved to the shape of the iconic gun barrel that is synonymous with the James Bond theme. 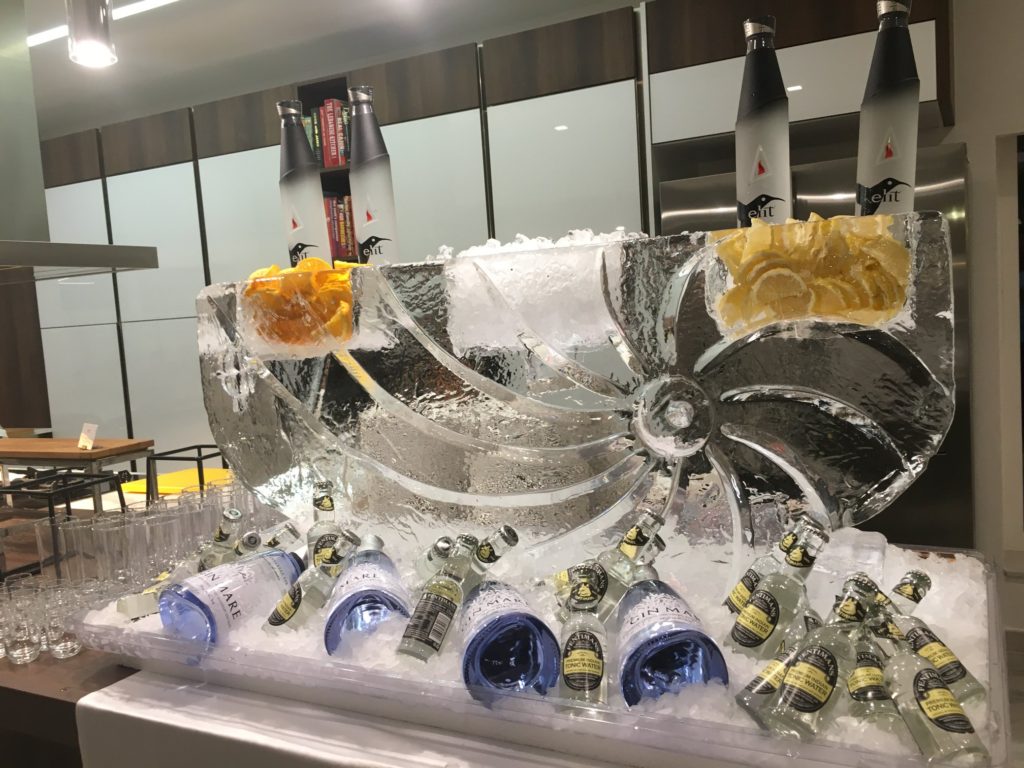 The venue was decorated with touches of black and gold and the Photomaker photo booth was set up to complement the colour scheme.  A bespoke template was created in square 6×6 format with the gun barrel swirl used to great effect.  The photo booth service included both prints and gifs and specially curated luxury props in black and gold were provided.  Guests were able to select to have their picture taken in either colour or Black and White. 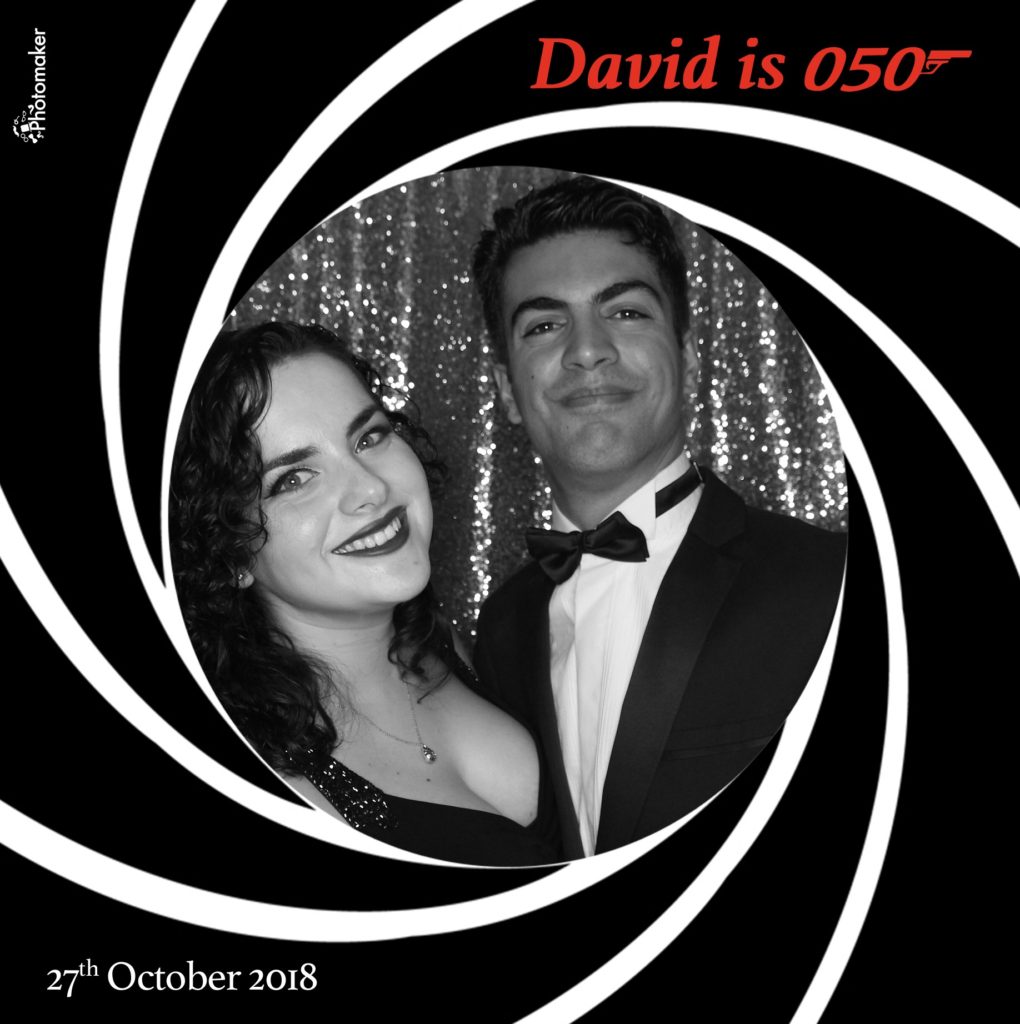 When the time came to cut the cake, there was another surprise in store, with a skilfully created piece by CakeArt by Christa.  The ‘tudexo’ cake was another nod at the Bond theme over delicious baci perfection.  It tasted as good as it looked! 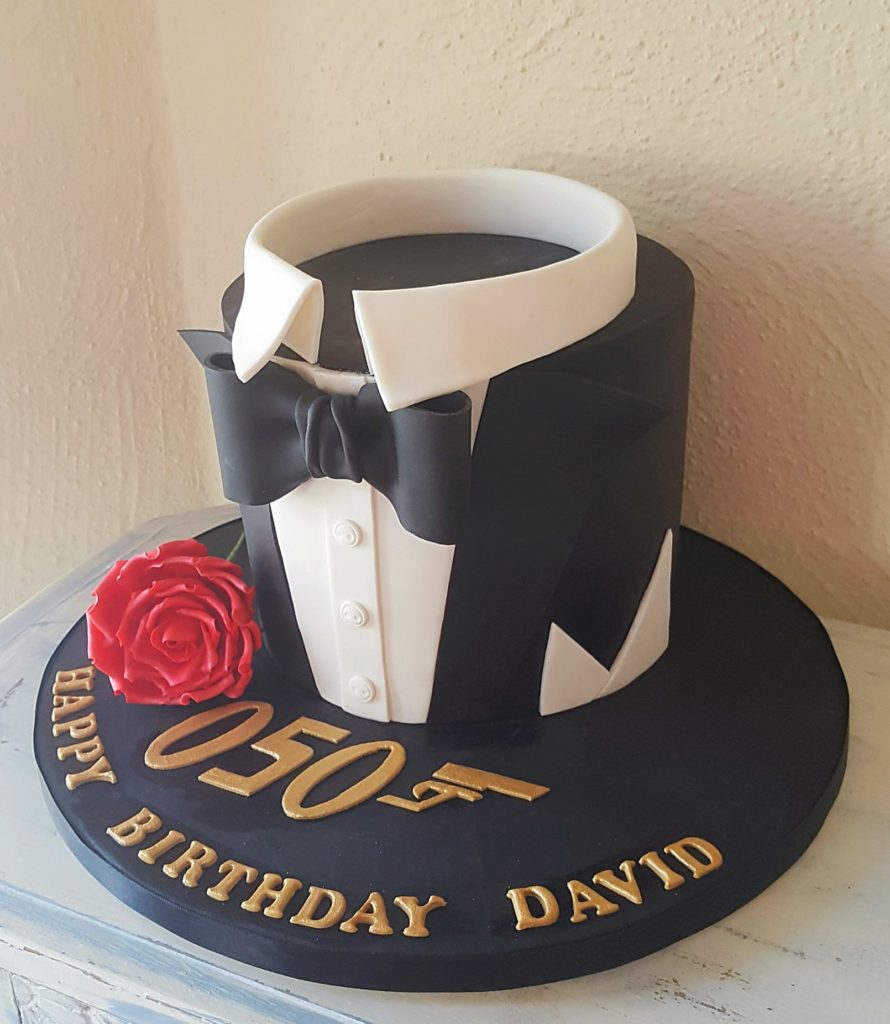 On their way out, guests were all offered a pair of drink coasters to take home as a memento of David’s milestone.  The coasters had been designed to look like casino poker chips to tie in with the Casino Royale theme.  Horace Enterprises was commissioned with producing them and didn’t disappoint at all. 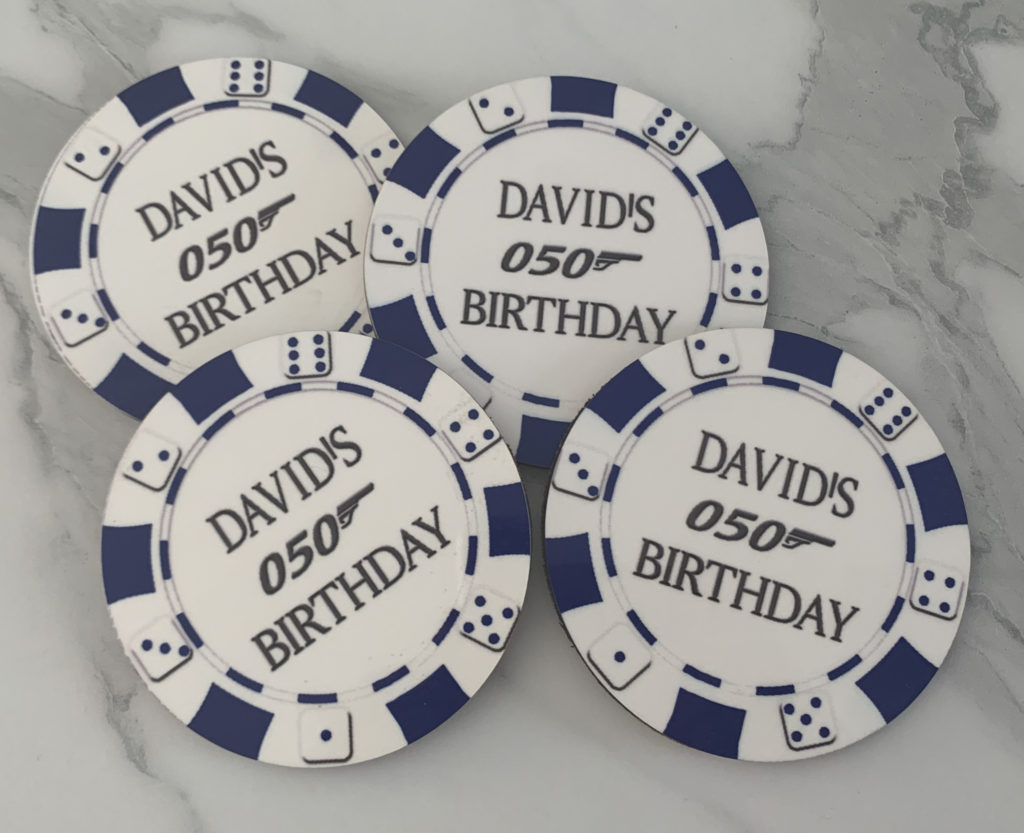 Cork-backed ‘poker chip’ coasters as a keepsake of the occasion.

The photo booth was busy all night long; the innovative print size and boomerang gifs were a success and greatly enjoyed by the guests in between dancing the night away and having a drink or two. 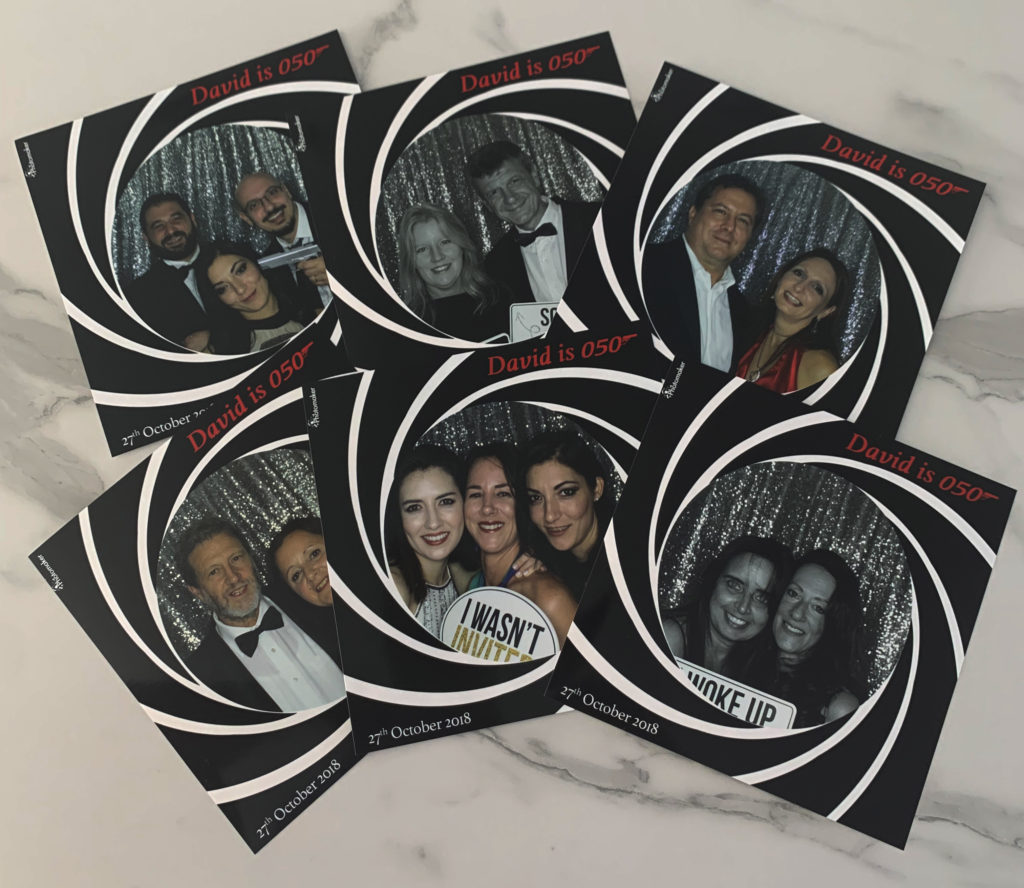 A small selection of prints from the event.